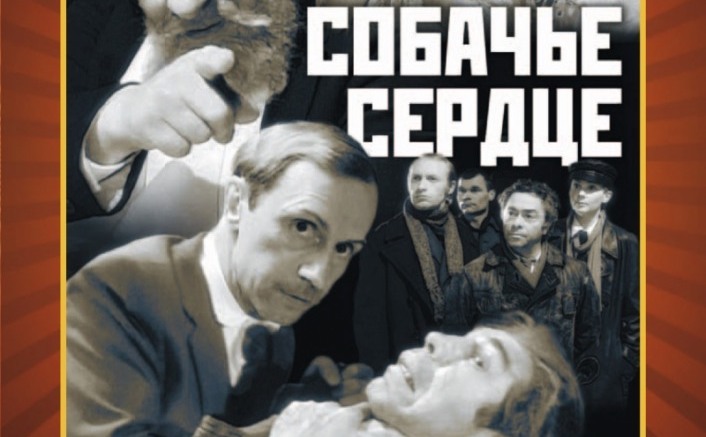 nadine kindly invites you for RusClub #31.

“This Soviet film tells the story of Preobrazhensky (Yevgeni Yevstigneyev), a surgeon, who is a professor of medicine in Moscow. After the Russian revolution is thoroughly in place, he is visited by the housing committee, who feels that he should share the spaciousness his “big” five-room apartment with several others. Meanwhile, in an experiment he implants a dog with the heart and brain of a tramp. The dog gradually transforms into a man (Vladimir Tolokonnikov), but still has some doggy attitudes: for instance, he chooses to call himself Sharikov. Since Sharik is a common Russian dog name, just as “Rex” might be in the West, it is clear where the man-dog’s sympathies lie. Sharikov becomes associated with the local Party officialdom, and begins to terrorize the professor and his assistant, Dr. Bormental (Boris Plotnikov). After he becomes a member of the housing committee, he wangles a room in the professor’s apartment. Also, after being appointed a member of a state committee to deal with stray animals, Sharikov refuses to allow dogs to be killed, only cats. The movie is based on the 1925 story by Mikhail Bulgakov, which was very hard to find in Russia up until the perestroika. After people began reading it for the first time, they were amazed to discover how daringly he had criticized the emerging Soviet system. This Russian made-for-TV movie is perhaps the most successful adaptation of the story; an Italian version was made in 1975.” – Clarke Fountain, Rovi