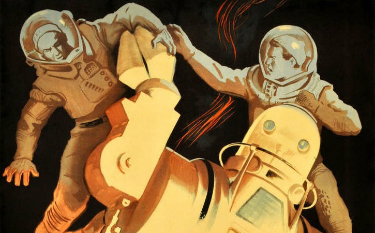 nadine kindly invites you for RusClub #34.

“Though they didn’t know it at the time, many sci-fi fans of the 1960s saw the Russian Planeta Bur (Planet of Storms) — and they saw it twice! Conceived in epic terms, this is the story of a band of courageous 21st century cosmonauts who land on the planet Venus. There they must contend with a seemingly endless supply of hideous reptilian monsters, each one more fearsome than the last. In 1965, producer/director Curtis Harrington, utilizing generous chunks of Planeta Bur, fashioned his own extraterrestrial thriller, Voyage to the Prehistoric Planet; as an added bonus, he included several newly shot scenes with Basil Rathbone, who was simultaneously starring in Harrington’s Planet of Blood (1965). Purchasing the negative of Planeta Bur one year later, producer Roger Corman likewise excerpted all the highlights, then put his protégé Peter Bogdanovich to work on a script that would blend the original Russian footage with a new narrative featuring English-speaking actors. The result, directed by Bogdanovich under the pseudonym Derek Thomas, was released in 1966 as Voyage to the Planet of the Prehistoric Women.” ~ Hal Erickson, Rovi